Pawpaw is both one of Ohio’s most famous trees, as it is our state fruit after all. It can easily be recognized by it’s large (and I mean large) simple leaves, arranged pinnately. It typically is not too tall (for tree standards that is), ranging from 6-20 feet tall (Petrides pg. 269). 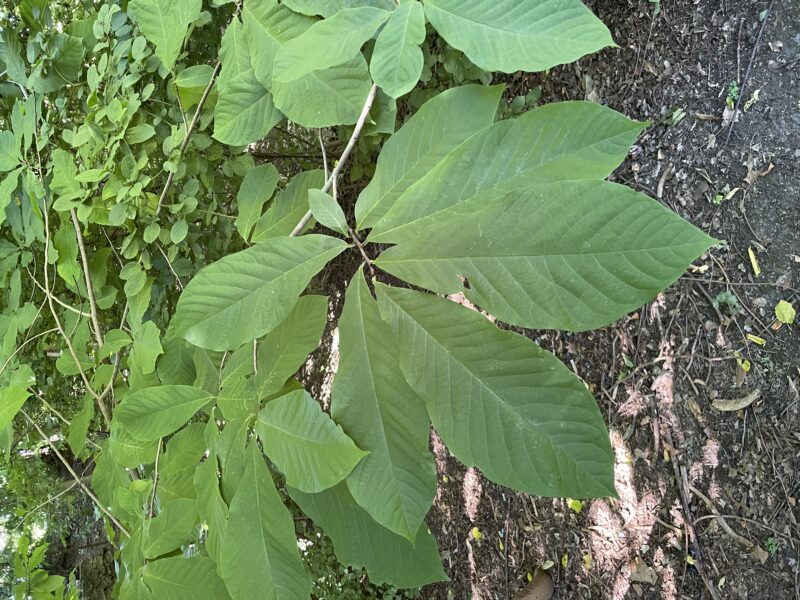 The massive size of pawpaw leaves

I mentioned earlier that it was the state fruit of Ohio, and if you are lucky enough (and fast enough to beat the animals that also find it tasty) you will see a very very light green in color fruit- shaped almost like a peanut that has been stretched out. Supposedly, it tastes of a cross between a mango and a banana, not that I would know as I am never fast enough to find them… stupid squirrels.

I found this particular pawpaw in the woodlot on campus, just east of mirror lake (it is very clearly a pond). It is growing in the understory of the small wooded area. This particular one also currently has fruit, and I will continue to check it every day until it is ripe. Those squirrels won’t get the best of me this time! 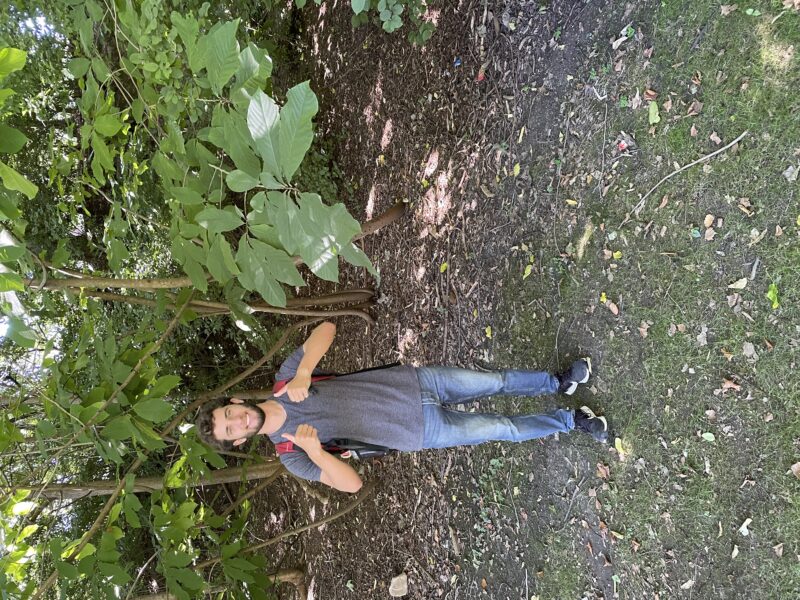 Fellow plant enthusiast Josh, next to a pawpaw for size reference

The white oak is one of my FAVORITE TREES, well, deciduous that is of course, everyone knows conifers reign supreme. Their leaves are evenly lobed, and are ROUNDED (this will be of importance momentarily), and the tree itself is fairly tall-  growing on average to 60-80 feet (Petrides pg. 216). 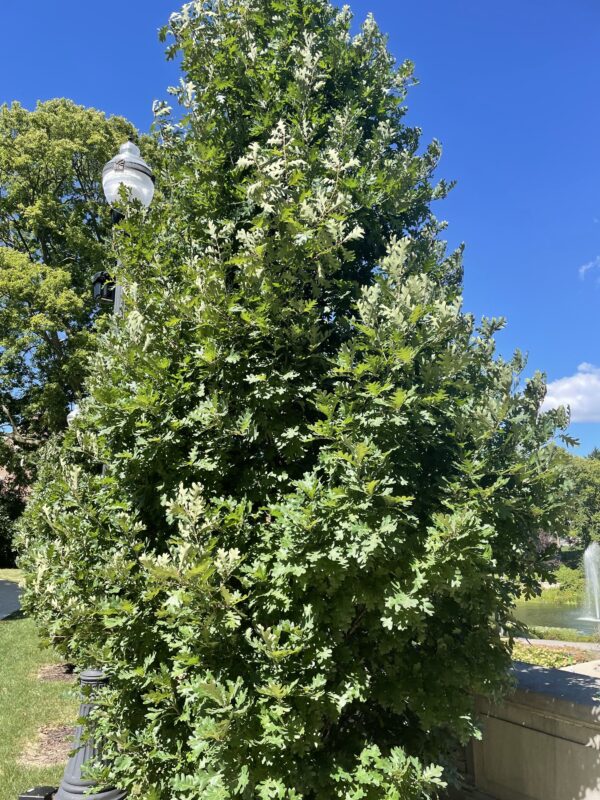 A white oak near mirror lake!

Now, I believe I mentioned something about the leaves… hmmm. Ah, THATS RIGHT- they are sound! Generally with oaks we divide them into 2 categories: red and white. This may be where you ask: “Ayden, what is the difference?” well, I will tell you. White oaks have ROUNDED leaves, while red oaks are POINTY. You may even have been taught a very politically incorrect way of memorizing this, but instead lets just remember white oak = ROUNDED & red oak = POINTY. 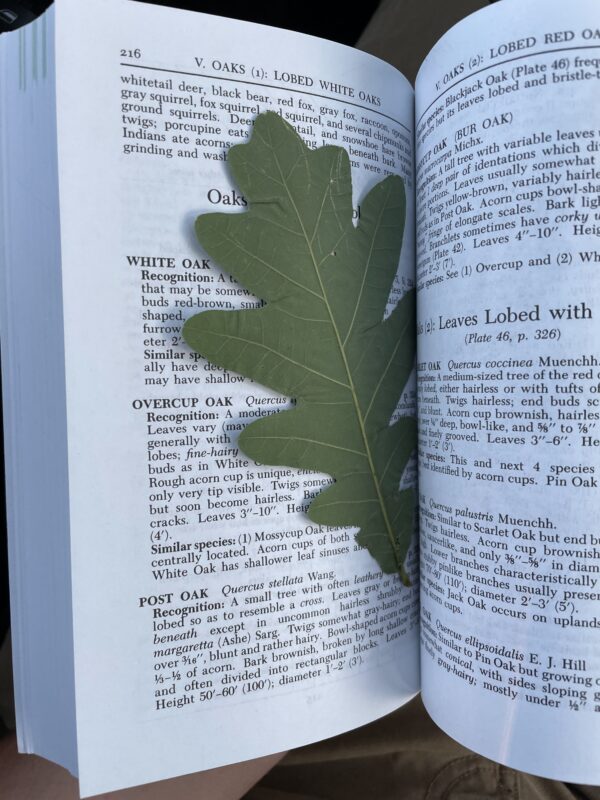 Here is a WHITE OAK leaf, note the ROUNDED ends. 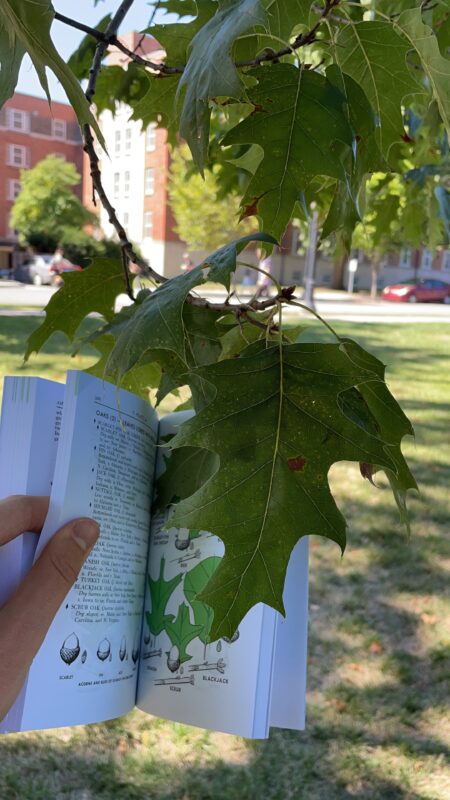 Here is a RED OAK, note the POINTY ends.

Now this is a weird one folks, so buckle up. The ginkgo is a very unique tree in the fact that it is the only extant member of it’s DIVISION! Not genus, not family, not order, not class, not phylum, BUT DIVISION!!!! HOW COOL IS THAT?!? These trees are native to Asia, but have been planted in various places, including all around campus. The trees themselves are also pretty distinctive, with some fan shaped (?) leaves. 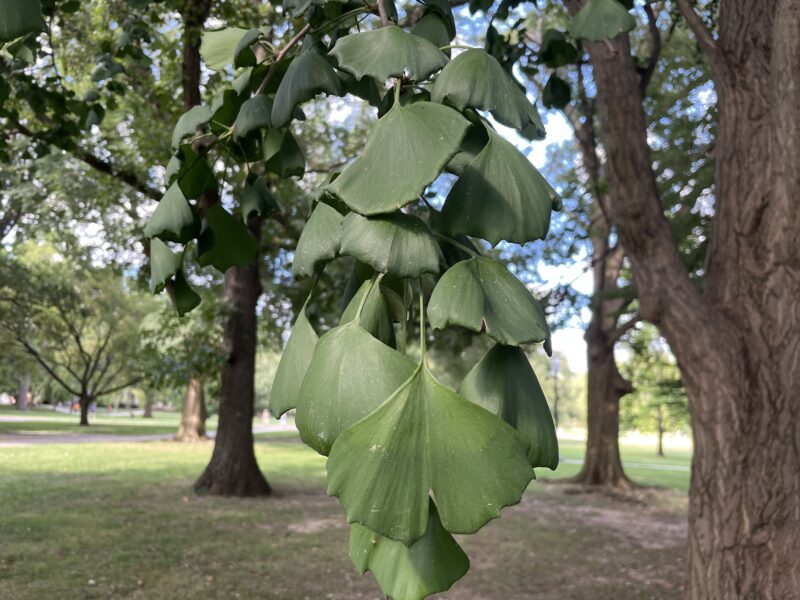 Look at those distinctive leaves!

I found this particular one on the oval, just outside of Thompson library. Ginkgo’s tend to grow best in temperate climates, and are without a doubt one of the most beautiful deciduous trees that there are out there. BUTTT I truly cannot emphasize enough the fact that these trees are ancient beasts, and are truly a marvel to behold. 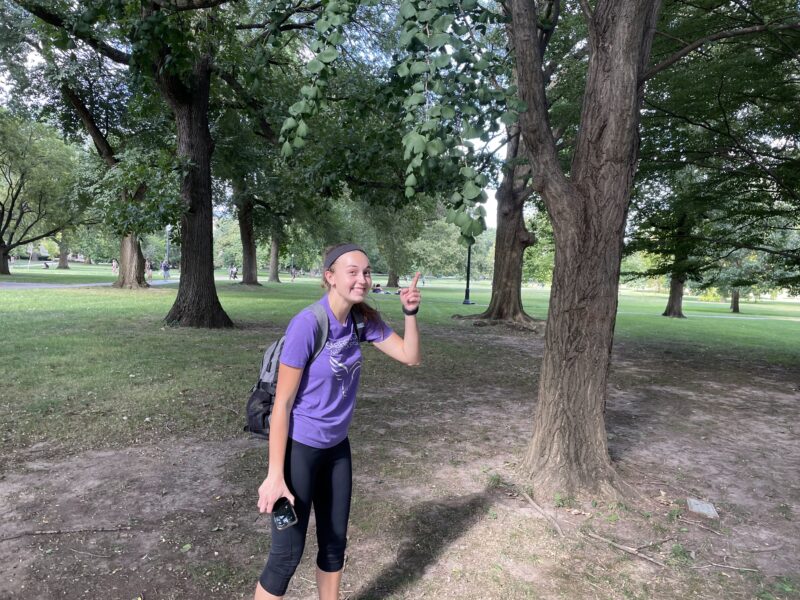 Novice plant enthusiast Cassidy, with a ginkgo for reference.

Have you ever been walking through the woods and think to yourself. “man I should take my knife and carve like hell into this tree”? Well if you dare think such a devious thought, you at least would not be alone as this is often the fate for many American beech trees. This tree is famous for it as a matter of fact, with its simple leaves along with it, it also possesses a bark that can be easy to carve deep into. 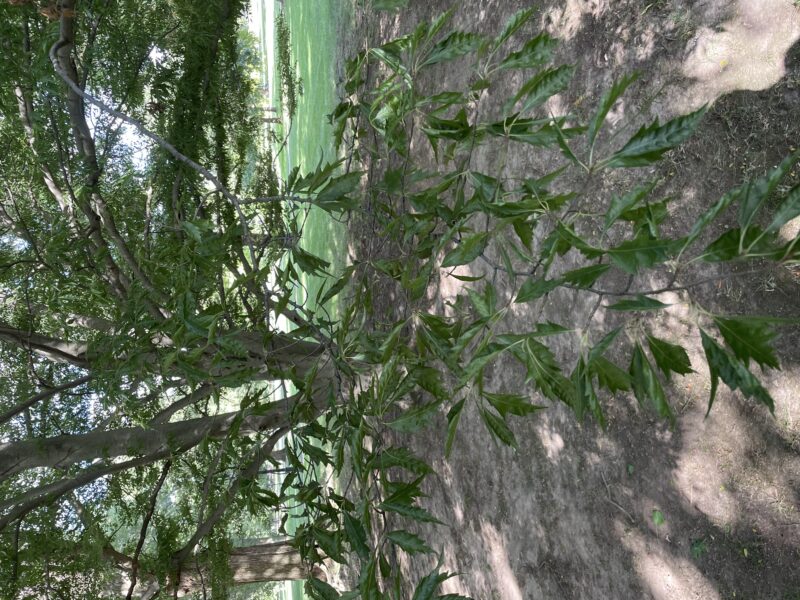 Note the simple leaves on this beech tree.

If you were also wondering why it is called a “beech” tree, well I am here to tell you that too! You see as we mentioned earlier, they are super easy to write on right? Well it just so happens that “beech” sounds like the old German word for book. Therefore, book tree! I had a coworker over the summer tell me this fact and I found it fascinating. 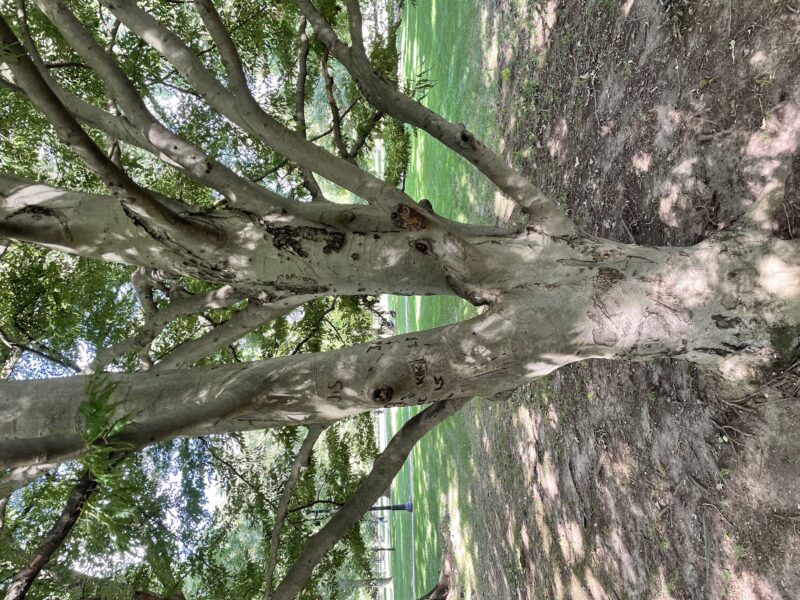 Note the carving on this beech I found on the oval.

Ah yes, one of the more recognized trees in Ohio I would say. This maple is large, and in charge only growing to about 40ish feet, but it sure can spread out. Not only that, but the canopy of the tree is (most of the time) so perfectly shaped , I mean that is hard to find in nature. This deciduous tree is native to North America, as well as Ohio (yay natives!) and turns a beautiful red in before losing it’s leaves, common names sure are creative. 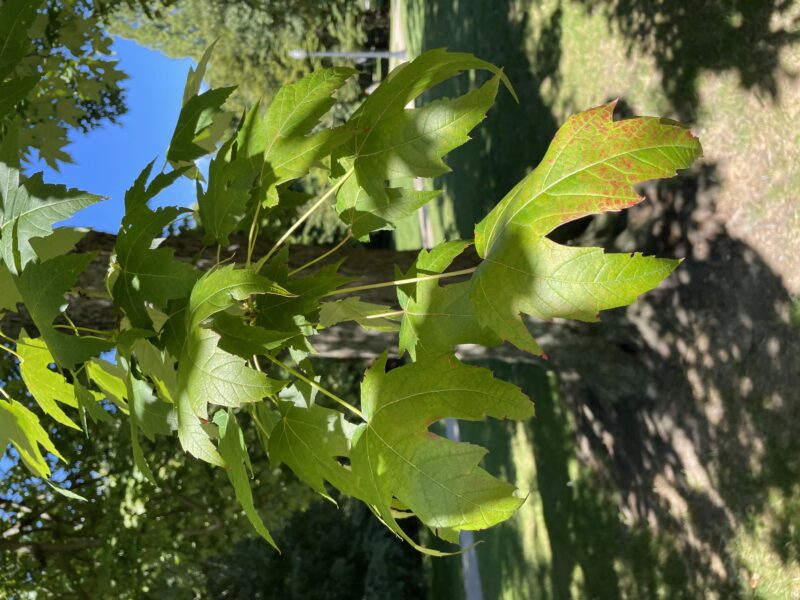 The famous leaf of a maple, O’ Canada, anyone?

The maples are a tell tale sign of fall, I’m not sure why I hold this association, but after a small poll amongst my friends they too agree on the fall vibes of a maple. This one was found in front of the union! 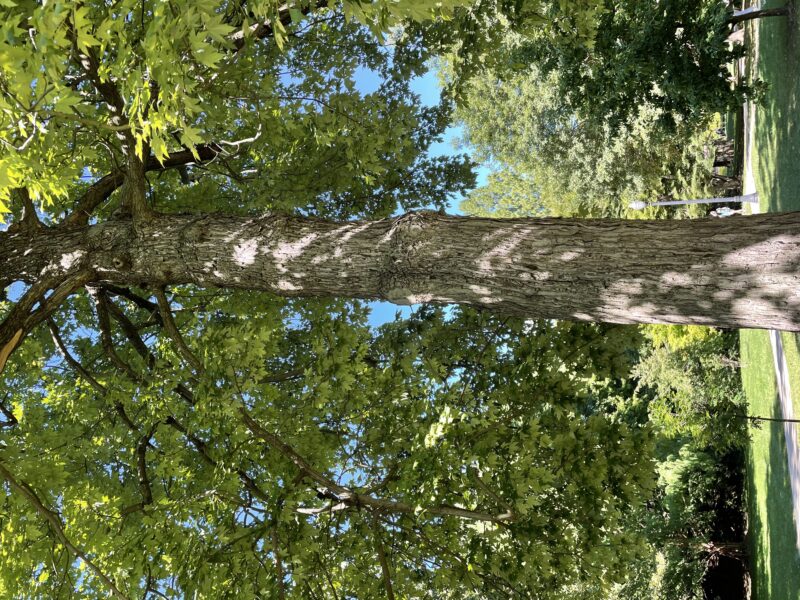 The trunk of our maple friend

The hackberry is quite the tree, and one I did not know too well prior to starting this project. It is a decently sized deciduous tree (at around 40ish feet to 60) that has bark that I was told and shown is very cork like when looked at after pulling it off. But it’s leaves are what really amazed me. Perhaps the best field mark of all time was the fact that these leaves were SO unbalanced. This is something I had heard, but to see it up close was crazy. 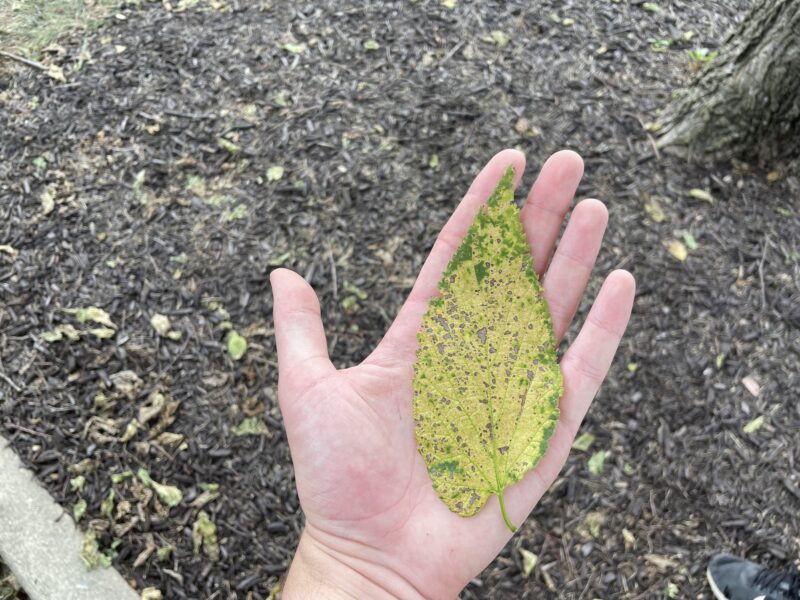 Look at those weird proportions, almost an angle. 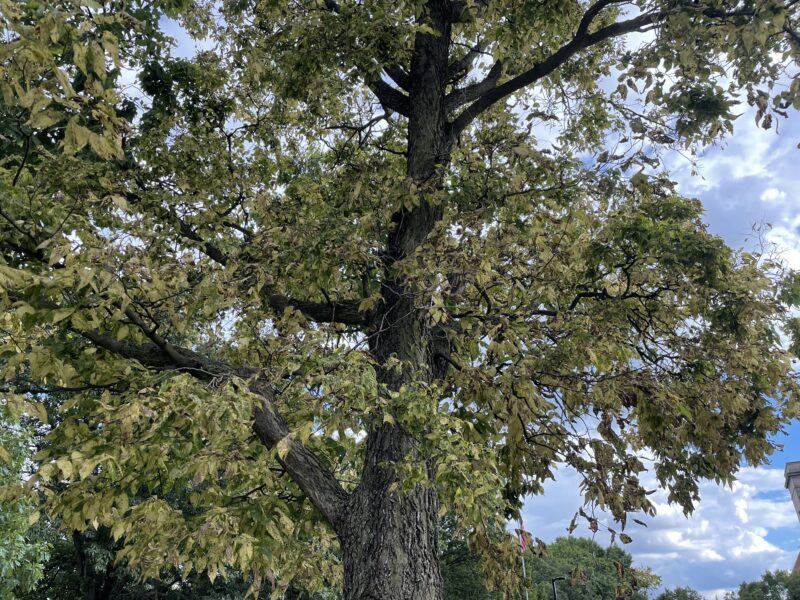 This hackberry was on west campus!

Another famous tree with a really creative common name- oh wait, this one is a LIE *mad emoji*. In flowering, the eastern redbud is not red, but rather a more pinkish, purplish, not reddish color. How it got this name was clearly due to someone having colorblindness or something. This is a smaller tree, compared to others, and would maybe be lucky to touch 30 feet. 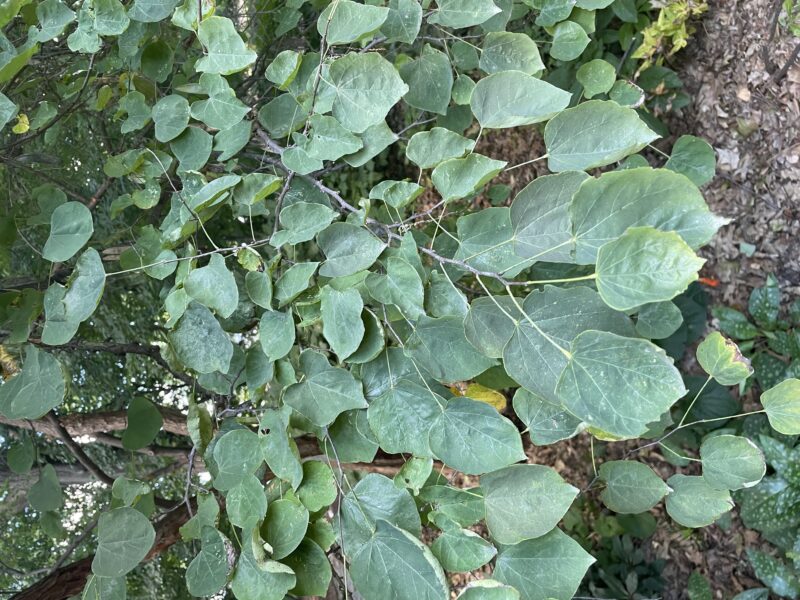 Not a native elm, but a pretty one nonetheless (they all look the same to me, I am sorry). This tree is native to East Asia, and again, is of modest size at the moment but can reach 50 feet tall! This tree is said to be one of the best elms, although like I said, they all look the same for the most part to me. The leaves are toothed and simple, and I found had an interesting texture to them (smoothish? but also not quite smooth?). This tree itself was found on the oval, it was amongst a few other cultivated trees to help make our campus look prettier. I personally think native is always prettier though, but that is just me. 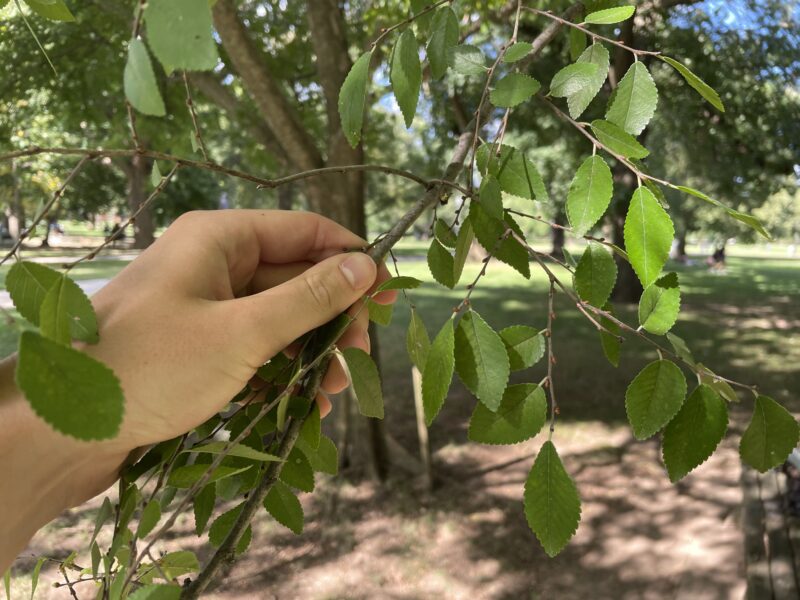 You can see here the really famous elm leaf.