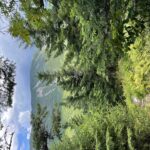 Ohio’s geology is subdivided into two parts: the western portion- which is characterized by its underlain limestone & the eastern portion which in turn is characterized by sandstone. They can further be characterized by the geographic areas that they encompass today; seeing as the western part of the state is very flat, this is in line with the western limestone that is easily weathered down due to its nonresistance to the glacial shifts millions of years ago. While the eastern half of the state is rather in contrast, not flat seeing as the glacier began to retreat, and the resistance of the stronger sandstone.

The original series of the strata is a tick layer of limestone followed by shales and then topped off with the sandstones and then was  titlted gently to the form of a low arch. The crest of the arch extended north to south through western Ohio. In the east, the ancient preglacial stream the Teays River flowed, this important river was present in Ohio for about 200 million years, and eroded the land during its entire mighty reign.

20,000 years ago, we saw the Pleistocene glaciers invade Ohio and we can see of our odd shape (topographically speaking) stem from this. In the eastern portion of the state the glaciers were quickly slowed down and halted by the steep-sided sandstone hills, and due to this the glacial boundary is no farther south than Canton, in Stark county. However, with no such boundary stopping it in the western portion of the state on the limestone plains, and it continued on south into Kentucky. 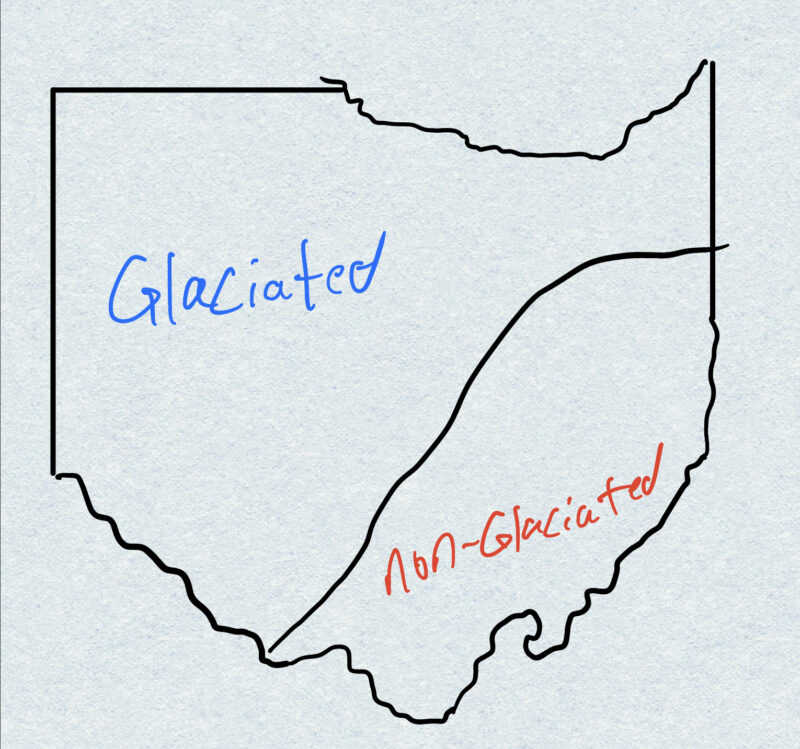 Glacial till as put by the article is simply “an unsorted mixture of sand, silt, clay & boulders”, and we can see it differ throughout the state! In the western portion of the state the glacial till is rich with clay and lime, which were products of glacial abrasion on the bedrock. On the other end of the state in eastern Ohio, we see the clay often lacks the clay and lime of the west. This is due to the fact that the glacier did not go through the eastern portion. The exception of course is north eastern Ohio, where the glacier came in contact with its barrier near the sandstone hills.

In regards to soil and substrate, we once again can split the state into two halves and see differences. Starting off with west yet again, we see that the substrate there for the most part is limy, clay till. Although extremally high in lime, this soil is consequently very poor in drainage for water. The eastern portion of the state is primarily made up of very permeable sandstone bedrock, and when it is exposed, produces a soil that is very acidic and low in nutrients.

Well first and foremost we have a problem, although I am 100% certain I photographed some of these species on our field trip to Battelle Darby Metro Park and Cedar Bog (it is not a bog, more to come on that later). However, it appears my camera had other plans so such is life we will have to go on just my personal descriptions of  most of these!

The eastern redbud is one of the most iconic trees and easy to recognize in the area, with its heart shaped simple leaves that alternate in arrangement. The bark of this smallish tree (by tree standards) is darker in coloration than (what some may call similar) flowering dogwood. It grows to ~40 feet and is in the fabulous fabaceae family, that means you guessed it, the fruits are LEGUMES!!!

AHA, I have  a photograph of this fentastic (see what I did there?) from cedar bog (fen). This tree is around medium sized, and scaly like a lizard, and has these fun little modified leaves that almost remind me of a pine tree. 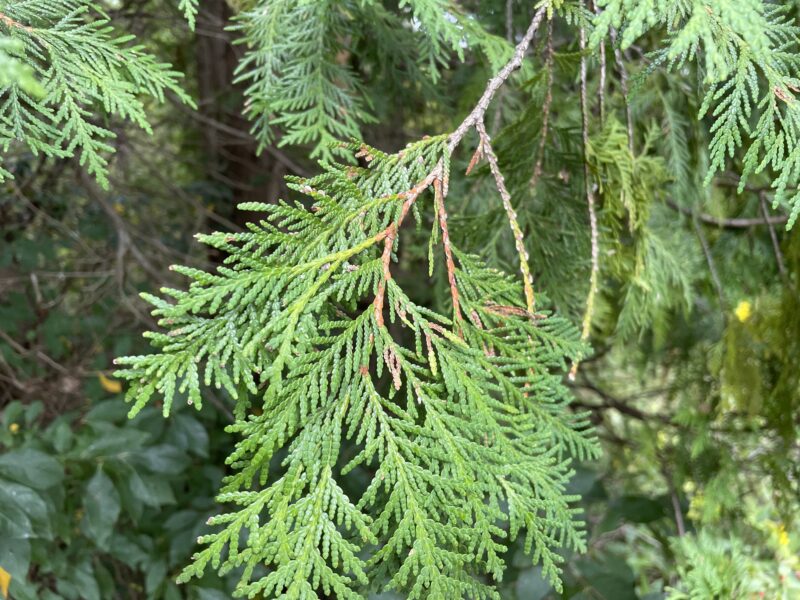 The blue ash is a medium sized tree with pinnately compound leaves that are alternate in arrangement. It can be distinguished from other Fraxinus sp. by its twigs being square in shape, it is rather odd at first, but very obvious. This is where the species name quadrangulata comes from! If I have gained anything from this class (besides you know, knowledge) it would be a new found appreciation of Fraxinus. This obviously being the ash genus, has been crushed by emerald ash borer- an invasive beetle that is destroying our native ashes. That is about all I knew about ash trees coming into this class, but since then have seen how beautiful and remarkable they can be when now taken over by a pretty beetle.

This oak is freaky and weird, an oak equivalent to the box elder maple almost I may dare say. This tree loves limestone soils, and is a medium sized tree with simple leaves that are alternate in arrangement. This is where it differs though, as its leaves will have 8-13 pairs of sharp teeth. Shark mouthed oak more like it.

Now this is also a good tree, and it is getting really hard to pick favorites. This is a tree I learned this semester, and will recognize those funky leaves instantly now. Funky you say? Oh, indeed I do. The leaves are simple but heavily serrated, on top of this they are ASYMMETRICAL!!!! What do I mean you may ask? Well I mean that the leaves shape cuts down diagonally. If that wasn’t weird enough, the bark is also incredibly corky and squishy.

Thick glacial till loving trees of Ohio’s western half

Sweet Buckeye (Aesculus flava) & Hemlock (Tsuga canadensis) are two species of trees that we can find in the unglaciated eastern portion of our state. The Sweet Buckeye is restricted within this range for reasons that are presently unknown, however, it is hypothesized that the problems are mostly within the realm of repopulation within the clay soils, and having difficulty in doing so.

The Hemlock is a big fan of moist and cool soils, and plot twist, southern Ohio’s sandstone soils in the valleys can provide. The northern portion of the state it occupies is likely due to again, the cooler climatic conditions which really take off in northern Ohio.

The best part of our field trip on the 11th of September, 2022 was Cedar Bog. Now as I have been hinting at, I feel the need to share with you all the news that Cedar Bog is in fact, not a bog *GASP* but actually a fen. What is the difference you may ask? Well you see fens flush, and bogs clog.  As the signs in the visitor center described, a bog is like a bathtub in which rain water enters and evaporation aids in its escape. A fen however gains its water through springs and or rain, and small streams will then drain the system flushing the fen. Cedar Bog was most likely initially filled by our great river friend who once flowed through the state, fillings fens in a fentastic manner.

My scavenger hunt was a little tricky at first, seeing as they all look the same no matter how long I look at them… but have no fear I did eventually figure it out. My assignment was to find two graminoids, which according to the quick google search I did when I received the card, “refers to a plant with grasslike structures”. I thought this would be easy! IT’S EVERYWHERE!!! Then I was informed it had to be a little more in depth than anticipated… I was less excited then. Nonetheless, I made it work and I present to you my graminoids! Sedges have EDGES!!!! 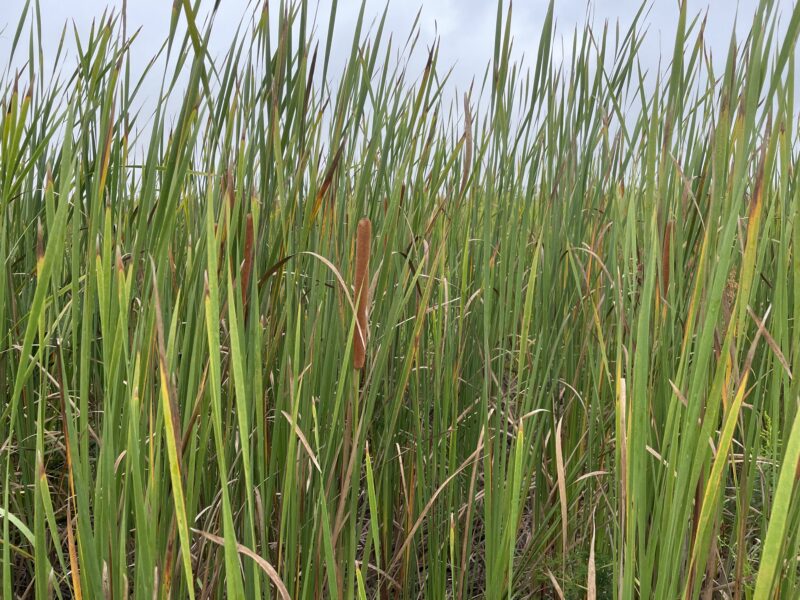 Cattails are the most famous and my favorite gramanoids 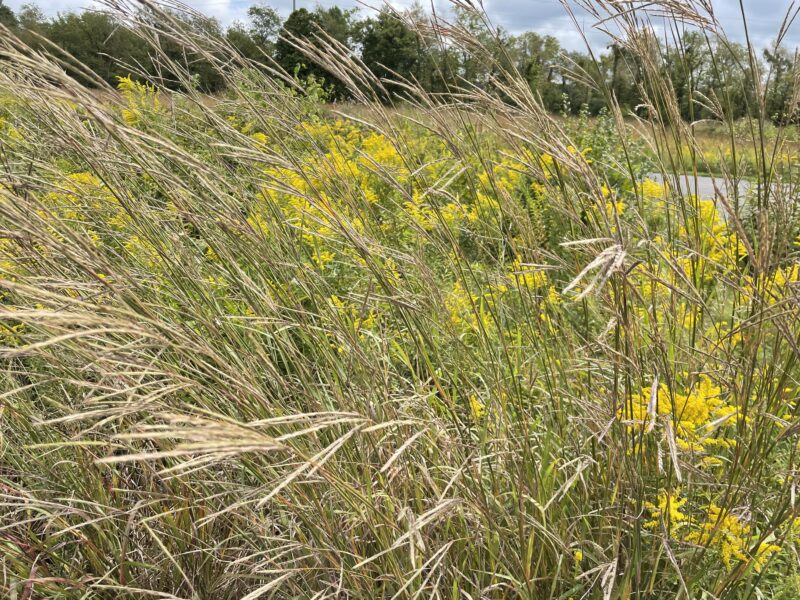 Here is some Rye! Ryeight place, ryeight time I suppose.

Essentially, since I have typed so much and made you read so much, we will keep it short and sweet to finish this up! My gift to you. We have a range from 0-10 with 0 meaning a plant can tolerate a lot more ecological changes and environments, while 10 means it can tolerate a lot less, and is more specialized. Like the opposite of mammal teeth, the more teeth (higher the number) the less specialized you are. Hm interesting, anyway lets get on with it.

This amazing little plant is funky as all get out when you look at it in bloom, unfortunately we were not treated with such a spectacle. This plant has a value of 3, meaning it is kind of toward the middle, a little more sensitive than a 0-2 but does still have some resilience. 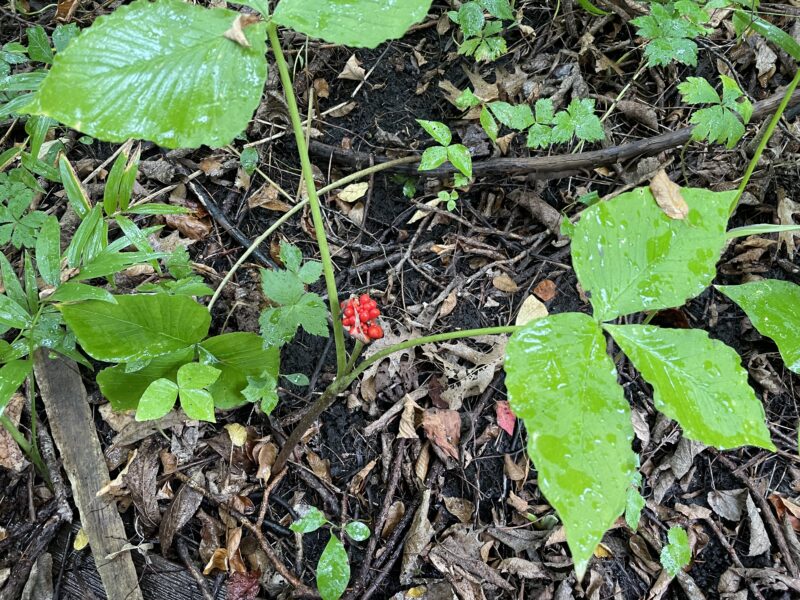 First off, I would like to say I LOVE CARNIVOROUS PLANTS!!! They are the best plants, and can do no wrong, well unless you are an insect that is I suppose… then it can be very wrong. This species of sundew has a score of a 7 (one has a 9, woah talk about a specialist), a 7 as defined by Dr. Klips’s website says “Plants with a narrow range of ecological tolerances that typify a stable or near ‘climax’ community”. So we are really starting to see some specialized picky plants now. 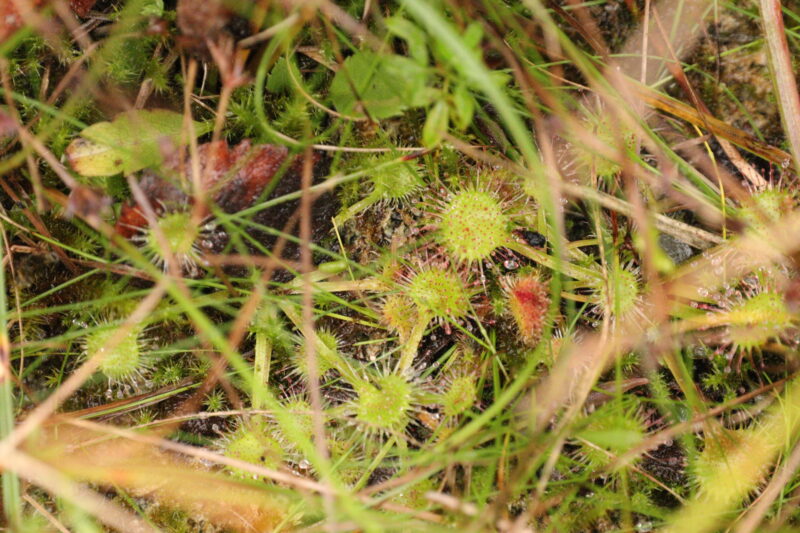 This pretty little flower caught my eye, so it would be a shame to not include it on our lovely ratings scale. WE GOT A 10!!! 10/10, perfect amazing (barring that this is not an incorrect ID on my part…). 10 means that this plant has a narrow range of ecological tolerances that exhibit high degrees of fidelity to a narrow range of habitat requirements. What a fun plant! 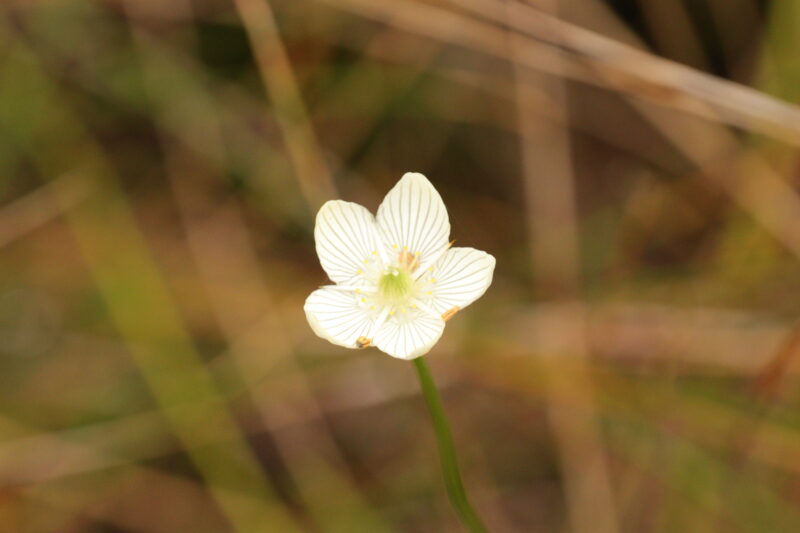 Who would I be to not at least include one tree on here for us? A monster that’s who. Anyway, lets take a gander at the value of our woody friend shall we?  Drumroll pleaseeeeeeeee anddddddd heeeeee getssssss a 6! Kind of near the middle of the pack, this is defined as Plants with a narrow range of ecological tolerances that typify a stable or near climax community like we mentioned earlier. 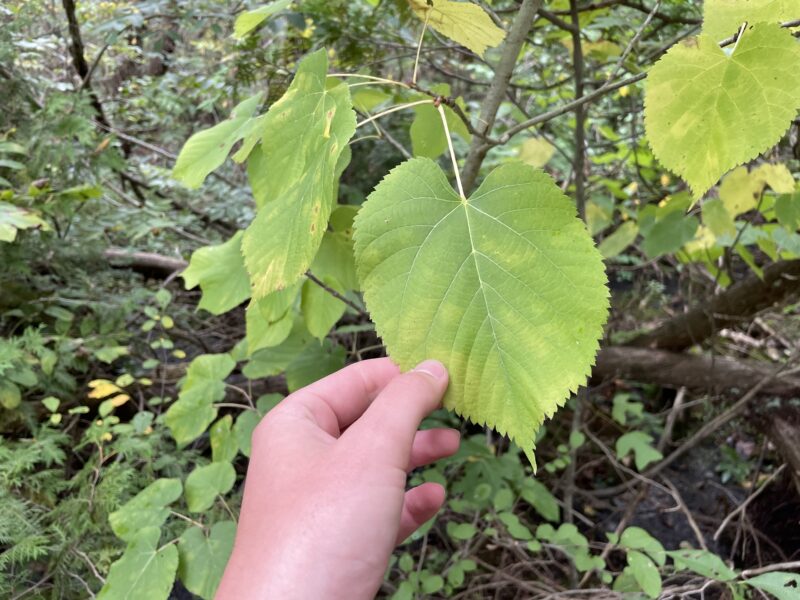