Acid Sandstones of the Hocking Hills

I think it is time we delve back into the world of geobotany, what do you think? Unfortunately, I do not care what you think, and I want the points for this assignment so we are going to anyway! So set you pH readers to <7.0 and here we go!

The first acid loving lad or lass we are going to discuss is the eastern hemlock. A coniferous species that can reach heights upwards of 70 feet (wowza), and can be recognized in numerous ways, but the surefire way is to take a gander on the underside of one of the needlelike leaves. Hmm, why? Well because there is a fairly distinctive white line that runs through it. Besides that, it also is more rounded at the top, and has very “flexible” twigs. They are under threat to a foreign invader, but I will touch on that later on down this page. Amazing tree, personal Ayden enjoyment value of 9.5/10 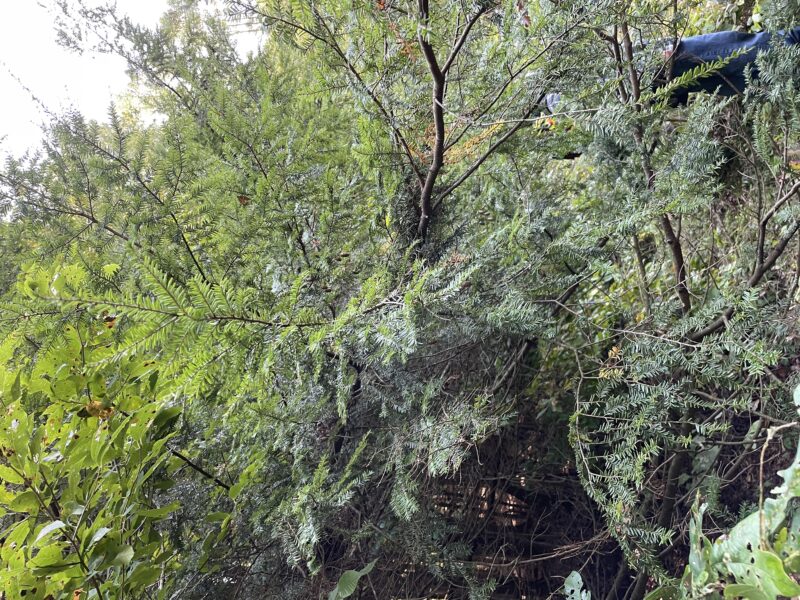 This acid trees bark can be a dead giveaway, with it being “dark, and deeply ridged”. The leaves themselves can look an awfully similar to a chinquapin oak from afar, but upon closer examination will reveal that the teeth of the leaves of a chestnut oak are much less toothed than those of a chinquapin oak. This tree was mid, and although had cool ecology, I wouldn’t rate it too high personally… personal Ayden enjoyment value of 5.8/10. 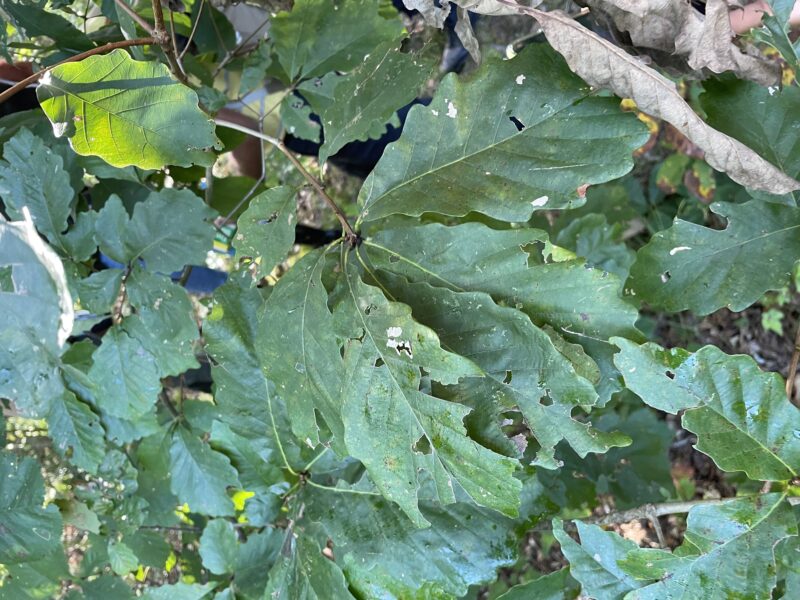 I really like how the Peterson guide describes this trees leaves, as “narrow to egg like”, because I mean that is like a PERFECT description of the leaves of this particular tree. As I learned on an ENR-3321 (great class, highly recommend!) field trip, this tree attracts bees and provides a darker colored honey with a carmelish taste to it. I am intrigued to that aspect, but still am such a huge fan of these leaves. Personal Ayden enjoyment value of 9.1/10 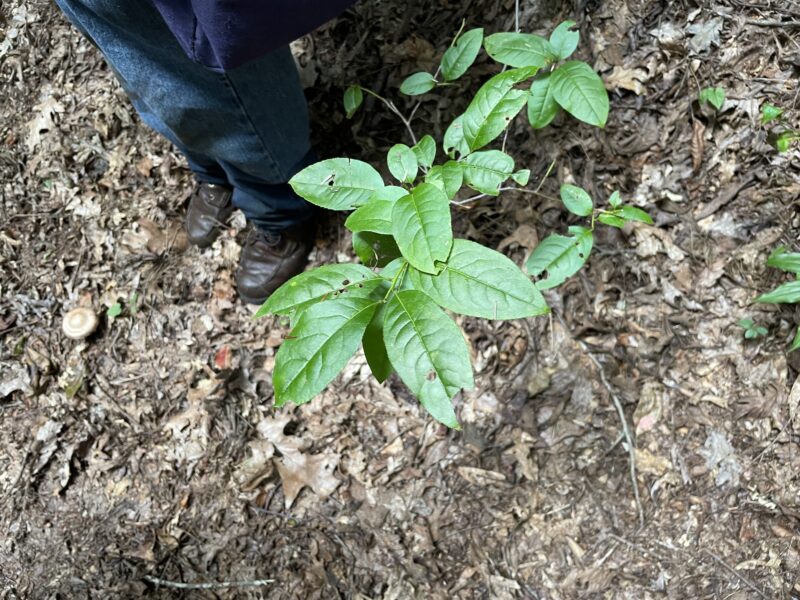 If I am being completely honest, I again had some photography fails on this trip and didn’t document all I should. SOOOO here are some other trees Forsyth mentions enjoy the acid soils of south eastern unglaciated Ohio. Scrub Pine (Pinus virginiana), Pitch Pine (Pinus rigida), & Mountain Maple (Acer spicatum).

Oh NOOOO, THEY ARE DYING!!! Well, some are just on their way to… remember that eastern hemlock mystery disease I illuded to earlier? Lets get into that, shall we. Allow me to introduce you to the Hemlock Wooly Adelgid (Adelges tsugae), a native to Asia, this small wooly member of the Adelgidae family is reeking havoc on our native hemlocks. How you may ask? Well, it is time to put my Entomology minor to use, FINALLY!!! This insect is a member of the order Hemiptera,  also called the “True bugs” (so yes you can call this one a bug). One characteristic of this order is a piercing, sucking mouthpart, and that is what is causing the problem here. The insect is feeding on the sap of the hemlocks, and while not a problem in its native range due to control of natural predators, as with most invasive spp. this is lacking here obviously. As of now, they are being treated by gross pesticides.

Next up on our tour of death is the Butternut Canker (Ophiognomonia clavigignenti-juglandacearum), first though, side rant: what on Gods green earth did I just write? Taxonomists need to be stopped. Just like that scientific name, this fungus is no bueno if you are a Butternut, as it almost always means certain death. It is thought that the fungus came from Asia with some imported Japanese Hickories in the 20th century. While there is not much that can be done if the damage becomes notable, if detected early enough there are some chemicals I cannot pronounce that have been showing the promise.

Now it is time for the star of the show, what you all have been waiting for… THE APP GAM!!! Before we go too deep into actual scientific based descriptions of this thing, I just want to first say how enjoyable this plant was, and I truly could not get enough of it. 10/10.

Appalachian gametophyte can look very similar to some spp. of algae or even a moss, but can be identifiable by its very thin leaves, and bristle like receptacles. What makes it so unique in the first place? Well, unlike most of the other ferns out there, the app gam consists of just its gametophyte- lacking sporophytes completely. Previously it was thought that thus unique plant had spread from a tropical sporophyte and diverged from there, but the modern belief is that it most likely once did possess sporophytes, and has just lost them into the void of evolutionary history.

Habitat wise,  we can find it in dark, typically moist places on sandstone and quartz rock. 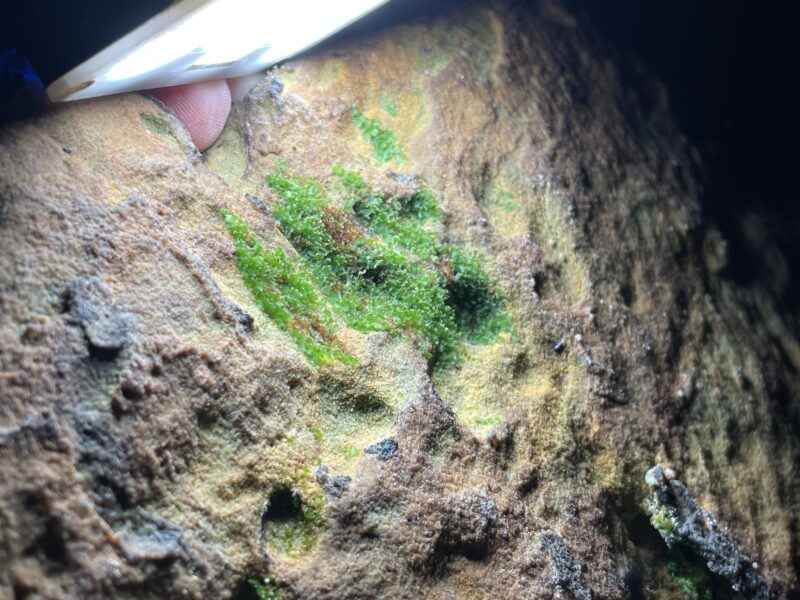 Fern gemmae are too large and too heavy to rely on wind for their dispersal, or at least in long distances (think of a papus for ideal wind dispersal), so how can they make it work? Without wind dispersal, that eliminates us down to a few other options such as water and animal. Both are fairly straightforward and self explanatory, so we won’t waste too much time on that, but rather focus on the hypnotized mode of dispersal for the app gam. Kimmer and Young have hypnotized that perhaps slugs are responsible for the short distance dispersal of the app gam, or potentially, ants (Rudolphi). Support for the idea of limited dispersal comes from its small distribution, as it has not been observed north of the last glacial maximum even though it absolutely could survive there with no problem. The literature currently supports the fact that an ancestral spore dispersal must be responsible for the extent of its current range. The likelihood of the app gam being supported by long-distance dispersal of some form of tropical sporophyte is possible, but I would say unlikely. I think that although not very well known, this method of long distance dispersal relies completely on luck, and although that argument could be made for any method of dispersal- I still think water or animal would be more likely to be potentially successful.

My particular assignment was that of two Solidagos (Goldenrod), thanks TA… I was not a fan. 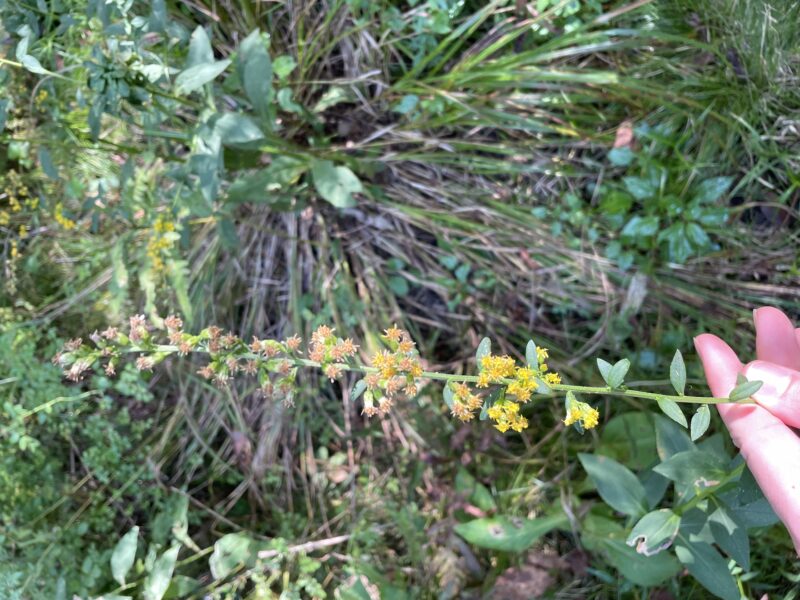 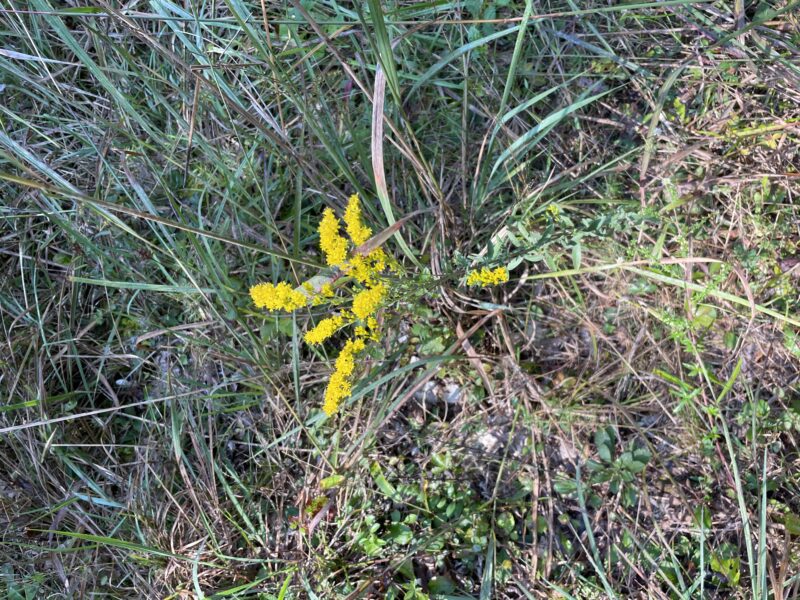 Other cool plants of the Deep Woods

Beech drops are a really cool plant that are an obligate parasite of American Beech trees, they sprout from the roots. COOL TAXONOMY TIME: its genus as a matter of fact means above/on fagus, which is the genus of beeches. 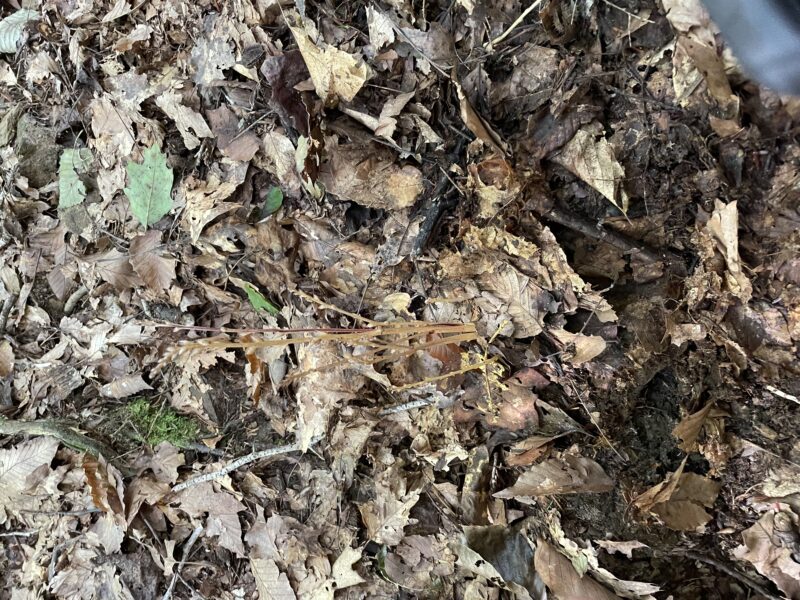 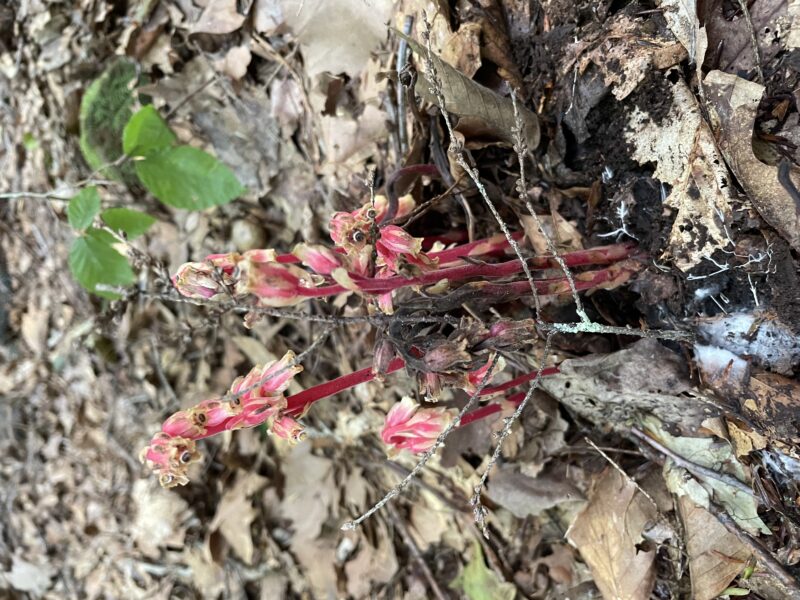 Not a plant I could take to species, and if prof Bob did, then I am sorry for my lack of memory to that regard… but I felt the need to include a member we found of this really cool class of plants! 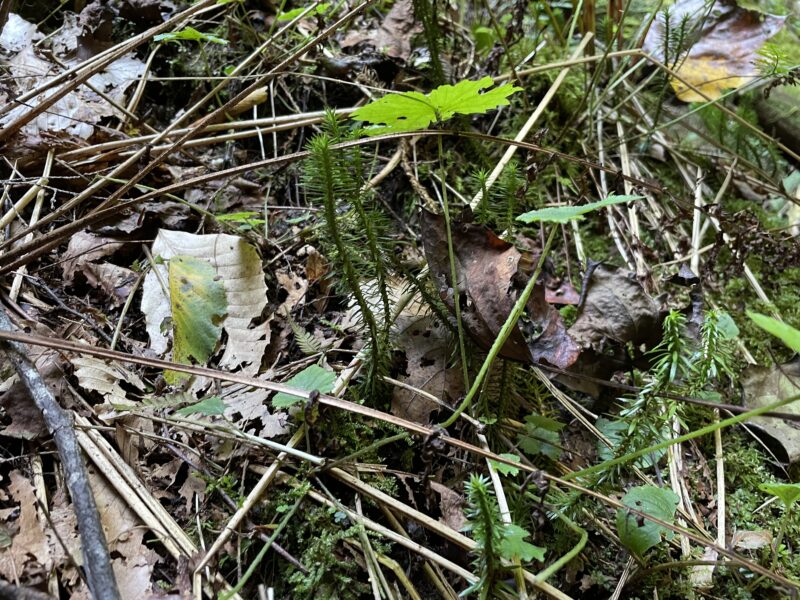 BOO HISS plants cannot be forgotten sadly, and I was quite enjoying this one until I was informed that it is a BOO HISS plant. This aggressive invasive threatens the understory of forest ecosystems and can take over rapidly. 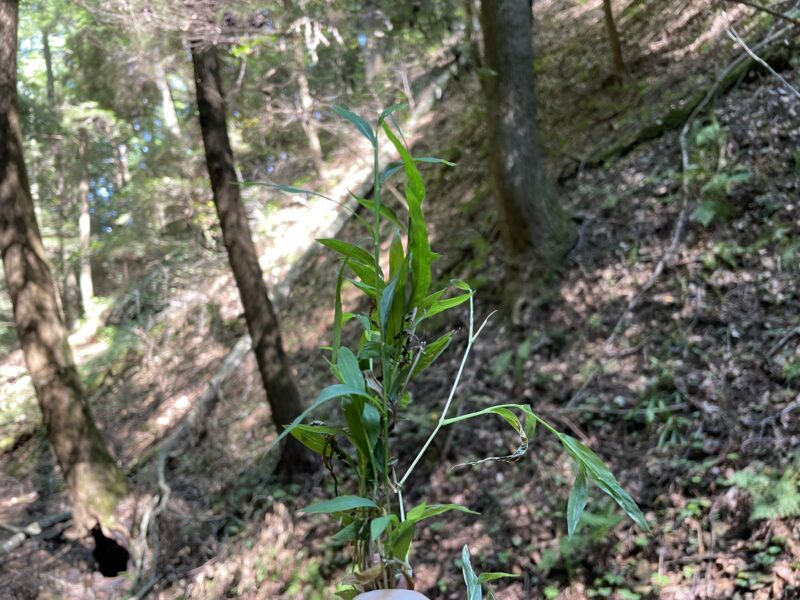