The park is 258 acres along the floodplain of the Tuscarawas River. It has a large variety of flora and fauna species. The flora ranges from simple algae, moss, liverworts, hornworts and ferns to large trees such as oaks and pines. Wild grasses and fruits are common with drupes, aggregate fruits and berries to name a few. The habitats range from grassy hills and fields to marshy wetlands, rivers, ponds and streams, and dense forest. Native plants are side-by-side to invasive and foreign species that have naturalized to the environment. The park attracts visitors for hiking around rich wildlife, fishing, sledding in the winter, and plenty of photography. The metro park is home to hundreds of species of birds from large raptors to brightly colored songbirds. Deer, raccoons, insects, turtles, fish, coyotes, foxes, rabbits and skunks are among a few named animals that live in the full ecosystem that is Firestone Metro Park. Not to mention this park is close to home in a literal and figurative sense, as I have personally lived here in Akron all my life, yet Firestone is still an exciting park all year round. 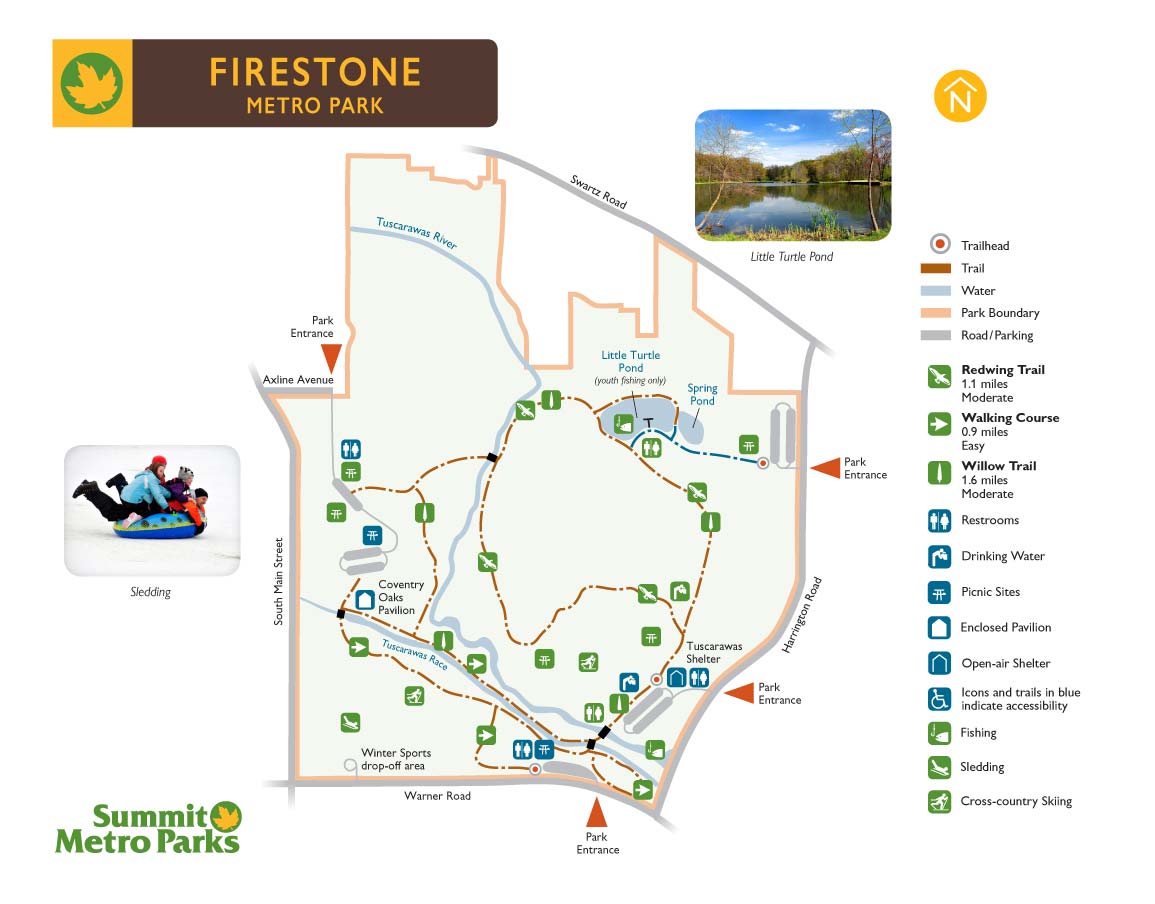 Native to Ohio and the Midwest, this tree blossoms in the early spring with clusters of 5 petaled flowers with 5 sepals, one central pistil and about 20 stamen. It is perigynous and apocarpous, the flowers develop into drupes.

The black cherry is valued highly for woodworking use, specifically fine cabinetry. The berries are not normal grocery store cherries, but are small drupes that are commonly used to flavor brandy and rum.

The leaves of the Black Walnut tree are compound with alternate arrangement. The leaflets are odd numbered and approximately 21 entire and serrated.

According to Thought Co. <https://www.thoughtco.com/how-to-identify-common-black-walnut-1341873>

The Black Walnut tree is allelopathic and produces chemicals in the ground that poisons nearby growing plants. The name Juglans is derived from Jovis glans, it refers to a nut fit for a god, “Jupiter’s acorn.”

This plant is considered a large deciduous shrub or a small tree. In either case, it is native to eastern North America. The leaves are pinnate compound with 5-7 leaflets that are serrated. The flowers appear white and drooping inflorescence with 5 petals, 5 sepals, and 1 pistil. They are hypogynous and apocarpous.

The seeds can be eaten like pistachios. They can be eaten raw or cooked, and are actually used in the place of walnuts for certain recipes such as for cookies.

A deciduous large shrub (or another small tree) that is yet another native to North America. Long slender alternating smooth leaves with long flexible stalks, the plant is an “atypical” willow in the regards that it is short and does not have a noticeable iconic droop of other willows.

Native to North America, this daisy related flowering plant has simple, alternate leaves and hairy stems. The flower has approximately 400 white ray florets surrounding many yellow disc florets. It is actually considered an invasive weed to Europe and Asia where it has been introduced.

Philadelphia Fleabane can be brewed in a tea that is used to treat diarrhea, gout, gravel, epilepsy and menstrual cramps/problems. It is also apparently useful in treatment for headaches.

As the name suggests, this plant is also a Native to North American, in case you have never heard of the Allegheny River, sorry, it is a river that stems off the Ohio River into eastern United States. The leaves are alternate and compound with 3-5 leaflets and serrated margins. Flowers are 5 white petals and 5 sepals, a multitude of stamen and perigynous as well as syncarpous. The flowers produce the edible blackberry, which is an aggregate fruit made up of drupelets.

With leaves of three, leave it be. Poison ivy is easy to identify as it possesses compound leaves of three smooth leaflets with pointed tips, a central leaflet and two opposite leaflets. They can grow as a shrub or as a vine. They are typically solid green and often appear oily.

Species in Relation to Coefficient of Conservatism

Often confused with poison-ivy, Virginia Creeper actually has 5 leaves instead of 3. These leaflets are slightly serrated and ovoid, but often appear oily and climb like vines similar to poison-ivy. However, although the leaves are not poisonous, the berries they produce are and if ingested, can cause kidney damage and even death to humans.

A woodland plant that thrives in marshy environments, Mayapple colonies grow from a single collective root. At each root bud, a shoot develops 2 branches for 2 palmate leaves that have about 5- 9 lobes that appear like an umbrella. The flowers are white, showy, short-lived, hidden, hypogynous, unicarpellate and actinomorphic with about a dozen stamen, 6-9 fused petals and 6 sepals. The plant is entirely toxic except for the fruit which is commonly used in (bland) jellies.

Like all irises, the Blue Flag Iris (Northern Blue Flag) flower possesses 3 stamen, 3 petals, 3 sepals, unicarpellate and it is also epigynous. This plant enjoys wetland meadows and is known to be both purple and blue. The sepals and petals are commonly referred to as “tepals” as they have similar color and length. The Blue Flag Iris is valued for it’s beauty and is seen as a symbol of faith and hope.

A tall fern that can reach up to 5 feet in height if positioned in constant moisture. This fern likes wet land and is prized for it’s fertile fronds that appear in early spring and appear cinnamon-brown. These fertile fronds appear first and release spores in early autumn. The roots of this fern are particularly large and wiry and are commonly harvested and used in horticulture for propagating orchids.

A boardwalk trail in the middle of Firestone Metro Park displays the diversity of plant life.

As a regular visitor of Firestone Metro Park, I often glance over the interpretive signs and simply enjoy the nature as it presents itself. However, signs can be very informative, especially to the new visitors.

Here we have a relatively plain but effective sign at Turtle Pond that illustrates the fish native to the region and planted in Turtle Pond (left). We also have a very in-depth sign that depicts the wildlife in Goose Creek (right).

As both of these signs go, there is plenty of wildlife but not much room for botany, which is also wildlife. Inspiring as these signs are, in my opinion there can be improvements. Adding real picture of the animals and wildlife in the actual environment aid in a more immersive experience. While information is nice, in my opinion, there can be the bare minimum which will not add much to the experience, and too much which can distract from the actual experience.

I apologize for the low quality, however I have never uploaded a PowerPoint slide as a media image into my own website before. Regardless, for this sign I wanted a very simple interpretive sign that focused on what is right in front of the visitor. These very pictures are simply used as backdrop with some informative facts about the species on display. With inspiration on what is too much and what is too little, along with my own opinion that wildlife is better experienced than read, the sign gives information unknown to new visitors, but they could probably get a better picture on their own if they searched.